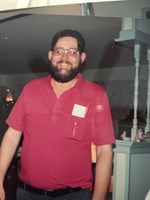 It is with sadness that I report the passing of Brother Gary Nanny, Beta Tau Chapter, Dinwiddie, Virginia. Gary entered our Fraternity at a time when such was beginning to fade from the scene so to speak. He maintained the Brotherhood and was a great asset to our Chapter. As a young man, he suffered a debilitating head injury as the result of an accident, and was for the most part out of touch with Fraternity following that. Please join me in ushering Brother Nanny into Nirvana Chapter. RIP Gary, and as is said in the Brotherhood, “Once a Brother, Always a Brother”.

His obituary can be found here.