A brief snapshot of our 140 years of existence

How it all began

Gamma Delta Psi Fraternity was founded on April 13, 1879 at James Hillhouse High School in New Haven, Connecticut, by Walter Rowlings Dann #1c, Arthur Henry Jackson #2c, Wylie Brantly Jones #3c, and Alexander Jay Wurts #4c for the purpose of “bringing together a body of kindred spirits for the mutual benefit and social enjoyment of its Brothers.”

Brother Wurts, the originator of the Fraternity was born the fourth of five sons in a little mining town of Carbondale, Pennsylvania in 1862. Shortly after his birth he was obliged to move to Europe with his family and live in Nice, France during which time he became quite proficient in French. On arriving back in the United States several years later, he was educated at Yale University and Stephens Institute from which he was awarded his Ph.D. and M.E. degrees, respectively. He studied electrical engineering in Berlin, Germany and obtained a position with the electrical research laboratories of the Westinghouse and Manufacturing Company in 1887. He worked with George Westinghouse on the development of the Nernst Lamp. For this notable achievement, Brother Wurts was awarded the John Scott Medal and also for his inventions in lightning arrestors and non-arcing metals. Through his association with Mr. Westinghouse, he became acquainted with Andrew Carnegie and was appointed the first faculty member at the Carnegie Institute of Technology as Head of the Electrical Engineering Department.

That same year he was awarded the Gold Medal from the World’s Fair for his scientific development of the Nernst Lamp. In January 1932 after two weeks illness due to typhoid fever he died at his home in Pittsburgh, Pennsylvania.

Brother Dann #1c was born in New Haven, Connecticut in 1881. He graduated from James Hillhouse High School and entered Yale University later. Presently he went to New York City where he was employed by the Compagnie Haitenne, a large dye and chemical concern. He managed the firm’s logwood plantation at Port-de-Paix, Haiti until his death in 1910. To all who knew him he was a man of sterling uprightness, simple in tastes, but high in ideals. He was ever a good fellow and with his death, Gamma Delta Psi suffered a great loss. 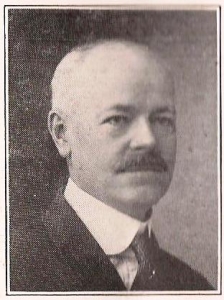 Brother #2c was Arthur H. Jackson, born in 1863 at in New Haven, Connecticut. He entered Yale University but left short afterward in 1881 to take a position with O. B. North and Company in New Haven, a saddler and carriage hardware firm. Five years later he joined the staff of F. S. Bradley and Company and was soon a member of the newly organized Buckingham, Clark and Jackson Company. He left them and traveled with Decature and Hopkins Symphony Orchestra in which Brother Wurts and he played a coronet, and was conductor for New Haven Orchestral Club for twelve years. Brother Jackson was also quite active in the choir of St. Paul’s Church in New Haven and was a fifty-year member of the Masons. Arthur H. Jackson, Alpha #2c, died on November 9, 1948.

Brother Jones #3c was born in 1862 in Hartford, Connecticut. Some years later his family moved to New Haven where Brother Jones received his education, graduating from James Hillhouse High School in 1881 and Yale University in 1883. He obtained a position as stenographer with the Wells-Richardson Company, a large drug manufacturing concern. He resigned in 1900 and went to work for Wyckoff, Seaman and Benedict, distributors of the Remington typewriter. He was with them for a few years and then designed to organize his own business under the name of Wylie B. Jones Advertising Agency. He later had branches in London, Paris and Sydney, Australia. He died at his home in February 1919, after a short illness. Brother Jones was well known in the advertising world and was considered one of the foremost advertising authorities. He was active in the launching of several WWI Ad campaigns and his generosity to public charities was recognized by all.

The growth of Gamma Delta Psi throughout the United States was slow but sure. As idea of high school level fraternities spread, and many more Chapters were added, located in Connecticut, Massachusetts, Maryland, Michigan, Ohio, New York, Pennsylvania, Illinois, Wisconsin, Missouri, Virginia and the District of Columbia.  Thirty nine chapters had been chartered from 1879 to 1925, but due to anti-fraternity legislation, World War I, and the 1918 flu pandemic Gamma Delta Psi was forced to stop her expansion program, and one by one the Chapters slipped into obscurity. These early years were the test and proof of our Fraternity; for they showed that the principles were fundamentally sound and good.

Growth in the 1930’s and 1940’s struggled as the world dealt with The Great Depression, World War II, and the Korean Conflict.  Chapters continued to exist in Niagara Falls NY, Port Huron and Detroit MI, Washington DC, and New Haven.  Gamma Delta Psi expanded the Fraternity into the college level at the University of Detroit with the founding of Alpha Tau Chapter in 1950.

As members of the Inter-Fraternity Congress, a group founded to benefit high school fraternities, Gamma Delta Psi was given contact information in 1954 about high school students in the Toronto, Ontario area interested in joining a recognized fraternity. The Alpha Phi Chapter of Mimico, Ontario would be our first Canadian chapter, one of 28 chapters stretching around the “Golden Horseshoe” of Lake Ontario from Toronto to Fort Erie.  In 1956, IFC information again was responsible for a group from Hopewell, Virginia to be chartered as Beta Alpha Chapter, which would lead to over 13 mostly Tri-City area Virginia chapters accepted into the Grand Crescent.  A college affiliate, Gamma Psi Fraternity, would be recognized in 1969, with chapters also located in Virginia and Ontario.

The last third of the century brought new pressures on Gamma Delta Psi, and all secret societies. The Viet Nam war, desegregation of schools, the drug culture, part-time jobs, and year-round club sports all removed vital time that would previously be spent with the local chapter. By 1995, our fraternity no longer had any functioning chapters or governing body. The Board of Trustees would struggle to maintain the Trust Fund and what few connections to alumni that had survived a period of great apathy. 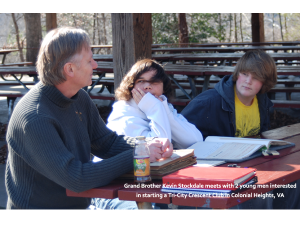 A rebirth of the organization started in 2008 with a Conclave of interested Brothers in Williamsport, PA followed by alumni celebrations to commemorate Gamma Delta Psi’s 130th Anniversary in Petersburg, VA and Toronto, ON in 2009. In 2010 Beta Alpha Chapter of Hopewell, VA was reactivated but only survived for a few years. In 2019 we celebrated our 140th Anniversary with functions held in Vaughan, ON and Prince George, VA.

The total membership is well over 40,000 with 87 chartered Chapters. Prominent members of the fraternity include two former Presidents of the US, Theodore Roosevelt and Howard Taft.  There is also General Douglas MacArthur, President Charles Seymour of Yale University, Edsel Ford of the Ford Motor Company, Connecticut Supreme Court Judge John Gilson, Glenn Croshaw of the Virginia House of Delegates, and Malcolm Allen of the Canadian Parliament.

140 years of history with hopefully many more to come!

Years since our founding